Is it possible for our elected officials such as our new President to discuss ways to save money in our country rather than ways to spend more money? My mind seems to float away into the land of "nowhere" when I hear talk of spending trillions more on this or that. Let's just take a sharp look at one possible cost cutting measure - the amount that it costs the U.S. taxpayers to keep former U.S. Presidents in… Continue

A decade ago, Oldsmobile went. Last year, Pontiac. Saturn, Saab and Hummer were discontinued. A thousand GM dealerships shut down.

To those who grew up in a “GM family,” where buying a Chrysler was like converting to Islam, what happened to GM was deeply saddening.

Yet the amputations had to be done — or GM would die.

As a member of The 9-12 Project of Central PA, you were represented at this meeting. The following summary provides a nice snapshot of the event.

GRASSROOTS LEADERS MET WITH THE CHAIRMAN OF THE NATIONAL REPUBLICAN COMMITTEE, MICHAEL STEELE

On February 16th, 2010, The Executive Director and Assistant… Continue

The rise of Islamic extremism is putting increasing pressure on Christians in Muslim countries, who are the victims of murder, violence and discrimination. Christians are now considered the most persecuted religious group around the world. Paradoxically, their greatest hope could come from moderate political Islam. By SPIEGEL staff.…

For 15 years, from the mid 1970's to 1990, I worked in Detroit , Michigan . I watched it descend into the abyss of crime, debauchery, gun play, drugs, school truancy, car-jacking, gangs and human depravity. I watched entire city blocks burned out. I watched graffiti explode on buildings, cars, trucks, buses and school yards. Trash everywhere !

Detroiters walked through it, tossed more into it and ignored it. Tens of thousands and then, hundreds of… Continue

I love the fact we are having good folks stand up to run for office. However they are running head fisrt into a strong wind.Until the basic problem is corrected it will be a very hard up hill fight with no clear path.The Article's Of…

Climategate Meets the Law: Senator Inhofe to Ask for DOJ Investigation (Pajamas Media/PJTV Exclusive)
Inhofe intends to ask for a probe of the embattled climate scientists for possible criminal acts. And he thinks Gore should be recalled to explain his prior congressional testimony. (Click… Continue

Study: U.S. No Longer Has a "Free" Economy

Non-Violent Resistance Is the Way By Jake Towne

Jake Towne
is running for U.S. Congress in eastern Pennsylvania's 15th district in 2010. Prior to returning home, he had been living in Shanghai as an engineer in the semiconductor industry for over 3 years. As part of defending liberty and championing… Continue

OK, this one is just too funny to ignore. This was posted on Failblog, and is one of the Top-Ten blogs of the week according to PJTV's Stephen Green. This was taken from an IRS instruciton manual...

Andrew Breitbart is reporting that former President Bill Clinton and James Carville are planning a counter offensive against the tea party movement. According to biggovernment.com, their plans are to identify 7- 8 national figures active in the tea…
Continue

"We believe there is no such thing as objective news."

This is an open and honest revaluation of an essential fundamental progressive philosophy. I've told you about this, but here it is from the horse's mouth...
An Objective Fact
"Atlanta Progressive News has parted ways with long-serving senior staff writer JonathanSpringston.… Continue

It's clear we are being observe by local folks that they show up for a rally about climategate in opperssion to find the truth.The fact that they show, is proof that the debate is far from over.The progressive left steps on the gas even in our back yard as we are in search of the real truth.This is why I see the Articles Of Freedom as our way to fully restore our country.There are just so many issues that need to be address.The Articles Of Freedom cover 14 constitutional violations.Just by…

I gave an interview last week, to Bill Wellock, a reporter for The Daily Collegian, PSU's newspaper.

Here is a link to the resulting article:

"Peter Trippett is not crazy. When I asked him about the perception of groups like the 9-12 Project or the Tea Party protesters, he laughed a…

The CSPAN Video on this page is a great history and civics lesson. Transcript included, too.

Super Bowl Democracy: One of Us Is Better Than Most of Them

In a country as huge as ours, representative democracy might be a crazy idea. But it’s so crazy it just might work – if citizens rule, not czars. Bill Whittle lays bare the folly of elitist micromanagement public and private on the latest Afterburner. Watch and comment here… 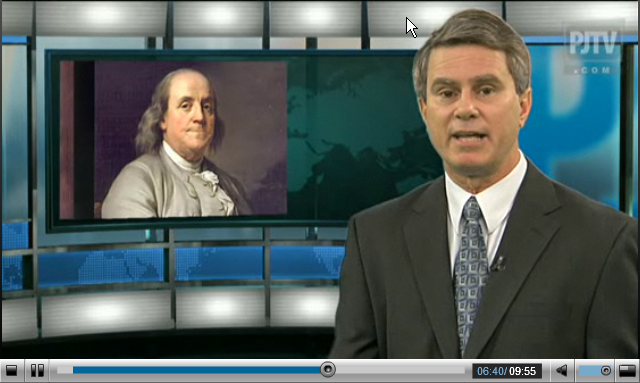