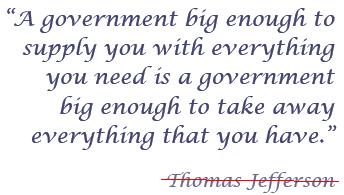 This quote appeared in a recent 9-12 Project of Central PA flier, that was delivered in the Centre Daily Times. Some have written to us, criticizing the attribution of that quote to Thomas Jefferson. These writers have implied that we did so, intentionally, to mislead the public into believing that our founders would have objected to the current size of government.

Until I received those complaints, I myself believed that these words came from Thomas Jefferson. However, I now must agree with the complaints, that the quote was actually paraphrasing a comment made by Gerald Ford in a speech to Congress, which he did not attribute to Jefferson:

Wikiquote states that this quote is commonly attributed on many websites as being from Jefferson, but lists such quotes as a mis-attribution.

The Jefferson Encyclopedia, at Monticello.org states:

We at the 9-12 Project of Central PA believed the attribution to be correct. It was not an intentional effort to mislead the public. Our researcher did know that Gerald Ford made a similar statement, but considered the general belief that Jefferson originally spoke these words as sufficient to justify the attribution. We have made the same mistake regarding this quote that, apparently, many others have made.

That being said, I would like to address two related questions: Is the quotation valid? And, would Thomas Jefferson have agreed with it?

So, can a government grow “big” enough in size or financial impact that it can take everything we have?

Presumably all of these government employees would be there to provide "needed" services to the public. But if they must tax all or most of everyone else's wealth, then the number of people requiring those government services would increase. Soon you would arrive at a situation where everyone was either working for the government, or totally dependent on government for their needs. Thus, government will have grown big enough to both supply everyone's need, and take everything they have.

This scenario is an extreme example, certainly. But, I think that the quotation refers more to government power. With enough power, government does not have to grow in size, in order to take everything we have.

Again, to be clear, we must define what is meant by “power”. What is the nature of the power that government wields? To make laws?

A law is a bunch of words written down on a piece of paper. A law against murder does absolutely nothing to stop murder. If there is any deterrent to murder that originates with government it exists in their ability to enforce their laws. It consists of the threat that if you kill another person, men with guns will find you, try you for the crime, and punish you. Note that you can see in our existing world that even this power does not stop murder, unless a law-enforcement officer just happens to be near enough to intervene. It merely allows the perpetrator to be punished after the fact!

The only real power wielded by any government is that of using force of arms against those who break their laws.

You can see throughout history, that it is very possible for this power to be put to unjust use. Tyrants have arisen, who have literally taken everything their citizens have. Tyrants take not only things of intrinsic value, they also take the dignity, happiness, and Liberty of the people.

So, it is certainly possible for a government can grow in power enough to take away everythnig we have, but how does that relate to supplying needs?

If a man claims a need for healthcare that he cannot afford, and those in government are convinced that it is their purpose to satisfy that need, their only choice is to wield that same power, threat of force, originally intended to punish criminals, against innocent doctors (who have committed no crime) to compel them to provide that need – or against innocent citizens (who have likewise committed no crime) to compel them to pay for such care.

Once you open the door for government power to be used against innocent citizens in this way, what limits can you justifiably place on government's use of that power? The world is full of problems, and the government will happily use that same power to solve any of them. If their solutions don't work, or produce adverse unexpected consequences (as force generally does) a simple understanding of human nature is all it takes to realize that those in government will blame someone else, and set about trying to solve the new problems.

Furthermore, as government changes, and new people are elected over time, those of you who are arguing so vehemently for government to use its power to force your vision of healthcare on everybody or to supply everyone's needs, may one day find yourself on the receiving end of such force, to compel you to do something that violates your beliefs, or to sacrifice something that you don't want to lose. 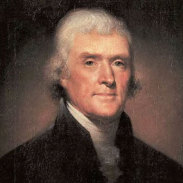 The best way to answer this question, is to use the words of Thomas Jefferson, himself. These words, I am certain, are clearly attributable to him.

To start, what did Thomas Jefferson think about a big government? In the Declaration of Independence, of which he was the primary author, and which he signed, you can find these words, in the list of grievances against the government of King George:

“He has erected a multitude of New Offices, and sent hither swarms of Officers to harass our people, and eat out their substance.”

And, what did Thomas Jefferson believe that government should be? Here are his words:

“If we can prevent the government from wasting the labors of the people, under the pretense of taking care of them, they must become happy.”
--Thomas Jefferson, in a Letter to Thomas Cooper, November 29, 1802.

“A wise and frugal Government, which shall restrain men from injuring one another, shall leave them otherwise free to regulate their own pursuits of industry and improvement, and shall not take from the mouth of labor the bread it has earned. This is the sum of good government, and this is necessary to close the circle of our felicities.”
--Thomas Jefferson, first inaugural address, March 4, 1801.

Finally, what did Thomas Jefferson think would happen if the government were to use its power for un-intended purposes?

“Of liberty I would say that, in the whole plenitude of its extent, it is unobstructed action according to our will. But rightful liberty is unobstructed action according to our will within limits drawn around us by the equal rights of others. I do not add 'within the limits of the law' because law is often but the tyrant's will, and always so when it violates the rights of the individual.”
--Thomas Jefferson, in a Letter to Isaac H. Tiffany, 1819.

“I consider the foundation of the Constitution as laid on this ground: That 'all powers not delegated to the United States, by the Constitution, nor prohibited by it to the States, are reserved to the States or to the people.' To take a single step beyond the boundaries thus specially drawn around the powers of Congress, is to take possession of a boundless field of power, no longer susceptible of any definition.”
--Thomas Jefferson, Opinion on the Creation of a National Bank, 1791.

Nobody exists today, who can definitively state whether Thomas Jefferson would have agreed with Gerald Ford's comment. But, I think the words Jefferson has written and spoken serve as strong testimony that he would have agreed with the spirit of those words, and would agree that our government today has taken more than one step beyond the boundaries drawn around them, and are in the process of claiming a boundless field of power!