Greg Fasolt said…
Hi Lisa. Thanks for joining the fight. See you on the bus trip, hopefully at a meeting before that.

Nick Adams said…
Welcome,,,,We can no longer trun our heads..We must stand together now.Thanks for joining the fight for our freedom.

Greg Fasolt said…
I Lisa - I just checked the rider list and there are currently six listed for the Lewistown stop.

Greg Fasolt said…
The next meeting is listed here. Peter tells me the format will be changing. Most or all organizational business will be handled 1 hour before the general meeting, which will be for education, discussion, etc. Please say hi if you make it to the meeting.

Greg Fasolt said…
Good luck with the appointment with your doctor. We really do need folks to take the initiative like this and spread the word. If it helps, we have a poster you can print and post or distribute. Get it here. 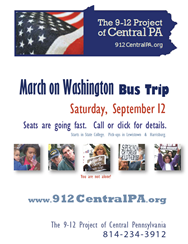 Greg Fasolt said…
Not yet - watching the budget ;)

Greg Fasolt said…
It looks like you are numbers 65 and 66, which places you on the second bus. We are working very had to get enough riders for the second bus to make it financially viable. I'm very optimistic, but the bus company has only extended the deadline until Sept. 5 for us to do so. Can you help by urging others to join us for the trip? Also, we have a very generous member who will provide up to 8 seats for folks who cannot afford the price, so don't let the price be an obstacle.

Ann Marie Taylor said…
Glad you're with us, Lisa!

Peter Trippett said…
Lisa wrote:
> Peter, yesterday, I was watching a liberal news
> station to hear their comments about our 9-12
> rally and they said that we are mean people and
> "what is this world coming too, with people like
> us in it." Can we do thing as a group about this
> verbal nonsense? Just because we don't agree
> with Obama doesn't make us a bad or mean
> people.

Maybe it is time to start engaging them. Maybe we should call that radio station, and ask to be heard.

If they think we are mean spirited, because we oppose a national healthcare plan, here is what I would say:

"Not a single tea-party-protester seeks to deny healthcare to anyone. Yes, there are people in financial trouble, who might have trouble affording a doctor or hospital bill. If you come to me, and say, 'How can we help these people?', you just gained an ally - we can work together to solve that problem in such a way that nobody's human rights are violated.

"On the other hand, if you come to me and say, at the point of a gun, 'You must help these people, and you must do it my way!', then you have created an enemy. I do not help anyone when forced - that is not charity, it is slavery!

"If you claim that there is no solution that does not involve such slavery, let me suggest some ideas.

"Proponents of government healthcare claim that there are 50 million uninsured people in this country, and hold this to be a grave injustice. I suggest that a person being uninsured is not, in itself, a problem. The problem occurs when a person is sick or injured, and cannot afford the necessary healthcare.

"Businesses are the only legitimate way to provide jobs. Businesses produce goods and services that are bought by everyone, particularly by rich people. You think it unfair that some rich guy can fly in a private jet? Such jets cost millions of dollars, and one rich person purchasing such a jet keeps many people employed in the aircraft industry.

"Furthermore, private jets require crews, service and maintenance, hangar storage, etc. How many people are kept in a job because of that jet?

"You would increases taxes on this rich man, to the point where he can't afford that private jet, out of envy or resentment? And then, you would use that money to fund your healthcare system? Well, if that guy does not buy his jet, how many people that might otherwise be employed would then be unemployed, and would join the ranks of those needing healthcare they can't afford?

"You are probably saying that even if taxes were lowered, there would still be people in need, and you would be right. So, please consider this.

"The number of people who have an immediate need for care, are far, far fewer than that 50 million number. These are the ones in need of charity. Our founding fathers wrote about charity, and established an order of precedence, from where such charity should come, and that order specifically excluded the federal government.

"The solution to this problem, which preserves everyone's rights, is to first address those problems which contribute to the cost of healthcare. Tort reform, insurance reform, permitting the sale of insurance across state lines, and many other good solutions have all been proposed, and ignored by the current administration.

"The point of any healthcare plan should be to remove as many people as possible from being in the position of needing care they cannot afford; reducing the cost of healthcare, to lighten the burden on everyone; and finally providing a safety net, which should relay as much as possible on private charities, rather than government.

"And, if such a law does not exist, and premiums are high purely because of corporate greed on the part of insurance companies, then most of us should view that as a business opportunity - let's talk!"

At any rate - that is what I would say.

Robert Bechtel said…
That is my plan .Now they have to listen and hear what I have to say.