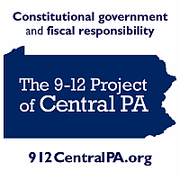 Are you concerned about…?

…elected officials who voted themselves raises while denying cost-of-living increases to citizens on fixed incomes in 2010 and 2011?

…creation of a massive health care plan that gives the government unprecedented control of its citizens and undermines the world’s best health care system?

…elected officials who endorsed this health care plan by refusing to listen to the will of the substantial majority of their constituents?

…elected officials who voted themselves out of this health care plan?

…erosion and loss of personal liberty, due to the continuing growth of government?

These concerns are symptoms of an out-of-control government that has captured the attention of a group of ordinary citizens who came together to form “The 9-12 Project of Central PA.” At meetings, we identify issues and seek to find peaceful and ethical solutions. We revere the Constitution and Bill of Rights.

We are non-partisan because principles–not politics–matter most. Our Republic has arrived at a pivotal place where, to remain healthy, America needs a massive infusion of “We, the People.”

Come to our next meeting.

It’s free and you’re invited. A place has been reserved for you!

RSVP for Public Meeting: Call To Action to add comments!