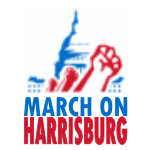 UPDATE 10 NOV. Owing to the effort required to put together last week's bus trip to DC, we have chosen to make this a self-organized event. Therefore, we urge each of you coordinate among other 9-12 members, friends, and family to support this event in Harrisburg. Car-pooling and van-pooling seem to be the obvious options. Please consider posting to this website in order to coordinate your efforts. Good luck and thanks to all.

On November 14th, 47 grassroots groups from across Pennsylvania are coming together for one cause. The event marks the first time so many different groups working towards liberty and the constitution will come together to March and Rally for true change in Pennsylvania.

To mark off the banquet Pennsylvania Revolution will honor a State Representative or Senator with the 2009 Liberty Post Award. The Liberty Post Award is named after the historic liberty pole used before the Revolutionary War to organize and plan the American fight for freedom. It will be an annual award given to a Pennsylvania State Legislator that has followed the Constitution of the Commonwealth and of the United States who have shown great passion for liberty and freedom and as a spokesman for we the people of Pennsylvania.

We are joining up with FreedomWorks, the Pennsylvania Tea Party Coalition, and Smart Girl Politics to organize a March on Harrisburg, PA on November 14th.

Why: To send a message to state lawmakers that we support limited government and lower taxes

FreedomWorks is pleased that the event organizers have invited Chairman Dick Armey to be the keynote speaker at the state capitol. We would love to have everyone who can be there on the 14th!

For more information, please click here. We will be posting more information as it becomes available. For now, mark your calendar, make your plans and tell your friends and family to get ready to March on Harrisburg!

Take a moment to send a "No Tax Hikes" message to your state legislators right now. Harrisburg is months behind on approving a budget, but that doesn't mean we should start to give in on the many tax hikes some are proposing. If we have to cut spending in these tough times, so can the state. They should consider this message a warning - if they don't listen now, we'll make sure they hear us on November 14.

We will start gathering on City Island in the Parking Lot at 1:00.

We will start marching to the Capitol at 2:00.

Speeches start at 2:30 on the Capitol steps.

Comment by Nick Adams on October 7, 2009 at 7:35am
We all have come to far to stop now,,,,Freedom isnt FREE ,,,,Many have paid the biggest price of all so we still have the right to stand and let our voice be heard..Come join us in making history .

Comment by Thomas Weaverling on October 7, 2009 at 4:10pm
I will try to be there. We need to keep the momentum going!

Comment by Heather J Lohr on November 10, 2009 at 9:23pm
How is everyone getting there? Carpooling - caravan?

RSVP for March on Harrisburg to add comments!