Thank you for contacting me in regard to H.R. 2499, the Puerto Rico Democracy Act of 2009. I appreciate receiving your input on this important issue and the opportunity to respond. 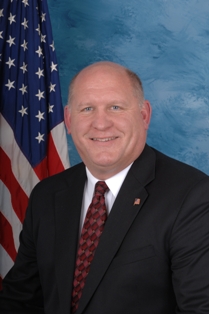 There has been a lot of misinformation circulating about this legislation, and I would like to set the record straight by laying out the facts. This legislation has been introduced in several forms in the House and Senate since 2006. H.R. 2499 creates a referendum regarding Puerto Rico's political status. An initial vote would provide Puerto Rico's residents with the option of changing their status. If that vote determines that a change in status is desired, a second vote would occur. Prior to being amended on the House floor, the bill would have provided three options for the second vote: Puerto Rico should become fully independent from the United States; Puerto Rico should form a "political association" with the United States that will not be subject to the Territorial Clause of the Constitution; or Puerto Rico should be recognized as a State.

Some made the claim that the structure and content of the plebiscite is fundamentally skewed towards statehood because there was no option within the second vote to maintain the current status. I completely agree, as did many of my colleagues, which is why an amendment was adopted during floor consideration which added a fourth option to keep the current status. I voted for this amendment and believe that this largely addressed the issue of making the second vote more fair. If Puerto Rico does move forward with any such effort to change their political status, whatever that may be, their polling methods will not favor one outcome over another.

This measure is not new. A similar bill was passed when Republicans had controlled Congress in the 1990's. This bill was originally introduced in the 111th Congress on May 19, 2009. The bill was marked up by the House Resources Committee on July 22, 2009 and subsequently passed by a 30-8 vote. On October 8, 2009, H.R. 2499 was placed on the Union Calendar and scheduled for a vote. On April 29th, 2010 the bill came before the House for floor consideration. I voted in favor of final passage of the measure, along with several amendments that I believe improved upon the bill and removed the ability to skew the bill towards statehood as an end result.

It has been alleged that passage of this legislation will make Puerto Rico a state. This statement simply is not true. If H.R. 2499 is passed by the Senate and signed into law by the President, Puerto Rico would conduct an assessment of the public's view on the current political status of the territory. This plebiscite gives the Puerto Rican government a tool to "take the public's temperature" on the issue. This bill is non-binding, meaning it would not trigger any action regardless of any result the votes generate. Therefore, this vote cannot result in Puerto Rico becoming a state. Should statehood be the end result of the plebiscite process, the decision would still be subject to ratification of the Constitution, identical to the additions of Alaska and Hawaii.

Others have argued that the Speaker of the House had brought the bill to the floor for political reasons; claiming that a state of Puerto Rico would automatically mean significant gains for the Democratic Party in both the House and Senate. Although I have many issues with the way this House has been run by the Democrat leadership since coming to Congress, this simply is not true. By way of background, the underlying legislation originally was introduced in 2006 by the former Puerto Rican Delegate to Congress, Luis Fortuño - a conservative Republican and former member of the Conservative Republican Study Committee. Fortuño currently is Puerto Rico's Governor and has been one of the most vocal advocates of this bill. Furthermore, Puerto Rico's House, Senate and courts are all controlled by Republicans, and the GOP has made significant gains in Puerto Rico in recent years. In short, even if Puerto Rico went through the lengthy process of statehood and eventually became a state, it most certainly would not be a Democratic stronghold.

Another claim made about the bill is that it would open the doors for Spanish to be an official language. This is not true. The U.S. Does not have an official language, but Puerto Rico does, both English and Spanish, and in fact, the majority of Puerto Ricans speak both languages. Passage of this bill would do nothing to make Spanish the lone official language of Puerto Rico because the issue does not apply to the legislation. However, you may be interested to know that two amendments were offered on the floor addressing language within the plebiscite. The first amendment would have required the ballots of the plebiscite be printed in Spanish, but was soundly defeated. The second amendment to the bill required all plebiscites to be provided for in English; required any official language requirements of the Federal Government to apply to Puerto Rico if they retain their current political status or become a state; and also expressed the sense of Congress that English should be taught for proficiency. I was pleased to vote for this commonsense amendment, which passed overwhelmingly.

At the core of this legislation was one consistent conservative value; the God given right for self determination. A government forged out of the will of the people is the hallmark of democracy and one of the sacred principles the United States was founded upon [EMPHASIS ADDED]. Puerto Rico has been a U.S. territory for almost 100 years. In fact, more than 20,000 Puerto Ricans fought in World War I and the men and women of the territory have fought and died for our flag and our American values in every military conflict since. Puerto Ricans continue to serve in all branches of the armed forces honorably to this day.

"We recognize the right of the Puerto Rican people to self-determination. If they choose statehood, we will work together to devise a union of promise and opportunity in our Federal union of sovereign States." - President Ronald Reagan (1982)

As the member of Congress representing Pennsylvania's Fifth Congressional District, I have been elected to serve the people and adhere to the Constitution. This is a duty that I do not take lightly and I make every effort to cast each vote with the most informed decision. While we may not always agree on every issue that comes before the House, please be assured that I will continue to serve with the best intentions at heart. Should you require more information or would like to discuss this issue further, please do not hesitate to contact my office.

For more information on my policies and happenings around the 5th District, please visit my website at www.thompson.house.gov. There you can sign up to receive periodic updates via my e-newsletter, The Thompson Times.

You wrote a reply to me, describing HR2499, the Puerto Rico ~Democracy~ Act. Thank you for voting for the amendment to add the fourth choice!

Although I agree that adding a fourth choice to the second plebiscite removes the skew against those who want to retain the status quo, something still doesn't make sense.

Why have two plebiscites? They cost alot of money! Why not have ONE single plebiscite, with all the options for the people to choose from?

This fact seems so obvious, that I am suspicious about the motives. I continue to believe that the purpose of the original, un-amended bill was to try to push Puerto Rico towards statehood. The mathematics behind the original two-plebiscite system cannot be argued against.

The fact that a bill has passed calling for an extra, costly, unnecessary, and redundant plebiscite does little to soothe those suspicions.

P.S. Please ask Congress to quit using the word ~Democracy~ in legislation. Democracy is a terrible form of government, in which individual rights are suppressed by the will of the majority. Our founding fathers viewed Democracy with contempt, and the word Democracy does not appear in our Declaration of Independence, the Constitution, or in the Constitutions of any of the states.