Check out this link. Cass Sunstein and his attempts to take away our 1st Amendment.

Mark you calenders everyone. Glenn Beck has set the stage for August 28, 2010 to meet at the feet of the Lincoln Memorial for the 100-year plan. This is set for August so you can bring your family. The D.C. planning commission is changing laws for large group assembly, and this may be the last time we can assemble at the Lincoln Memorial Mall. The planning Commision cites one reason for this is after the inauguration of the great one and the damaged grass and 100 tons of garbage left behind,… Continue

Glenn Beck has announced his plan to turn the country around. He is planning a tour to present his plan to the country. He has posted a widget on his site, to "demand" that Glenn should come to your community. Here it is ... if you use it, make sure you enter the zip code 16801, for State College, PA.…

My Letter to Senators and Congressmen Opposing Healthcare Legislation

I am writing to object, specifically to the Health Care Bill, and more generally to the direction our government is taking.…

We are proud to announce that we have launched the new www.breakitapart.net. We are seeing the membership transfer very smoothly and will begin to see the bills information digested into English over the next 24 hours. We look forward to serving the public with an easy to use method to find out what Congress is passing.

Thank you in… Continue

No more guns for the Pilots???

After 911 we not only used armed air Marshalls to help thwart terrorist activity we instituted a program which armed pilots as well.

"Rumor" has it that the current administration wants to DE-FUND that program. Link above and excerpt below.
NICE that we are announcing this "rumor" to the terrorists!!!

Why do you need that in here?

Again and again we hear the question "Why do you need to have that (a legally carried firearm) in a place like this.

If VA Tech, Fort Hood, and even the streets of New Orleans were not enough of a wake up call - How about a relaxing night shopping at TJ Max?

Would you ever need a firearm in a retail store?

FUTURE OF OBAMACARE IN HANDS OF MODERATE DEMS

Preserve your health care freedom by embracing the moderate Democrats who we need to do the right thing on health care reform.

Lieberman is the one we need to send letters to.....

Posted on the Daily Paul

I believe if enough people send letters to Joe Lieberman asking not to support the Health care bill he may fillibuster. Here are a couple of write ups on the subject:

As some of you know we need help in our Task Force meeting.The topics we talked about at the last meeting need your imput.It has become very clear what the Obama team has in store for us all.We need to step up the pace and meet them head on !!! Theres no time to waste.We all have seen some impact with the Tea Partys but the bottom line is they are still refusing to hear us.They are still pushing at a very rapid pace.Time to perpare for the worst RON PAUL says !!! One we know tells the truth.He… Continue

Would love to go to Harrisburg next Saturday, but have to work. Give em' hell!!!

Would love to go to Harrisburg next Saturday, but have to work. Give em' hell!!! Continue

I would like to thank everyone who attended the D.C. rally yesterday. What a great number of people to turn out on such short notice. You are all American Patriots.

I'm heading to DC Saturday Nov. 7 - there is a rally at 1:00 p.m. on the East steps of the Capitol Bldg. I have 3 extra spaces in my car. If anyone wants to hitch a ride, please let me know. Thanks. Oh, by the way will be leaving State College area at least by 7:00 a.m.

Just wanted to thank all who were involved in organizing bus trip to DC yesterday. I'm sure it took a lot of effort to put it together on such short notice. It was a great trip. I feel very fortunate to have had the opportunity to be a part of what I hope will help KILL THE BILL!

Also, thanks to Floyd for thinking ahead and making an appointment with Carney. I doubt we would have had the access we got otherwise.

As of today at 8:30am, I have 4 people including myself signed up for the trip to DC tomorrow.

Sadly, this one is not good news, but so close that Republican Party heads and incumbents must pay attention.

From the Wall Street Journal

Rhetorical qustion for all of you who did NOT vote:

Sen. Barbara Boxer is trying to pull a fast one!

She wants to force her outrageous Boxer-Kerry cap-and-trade energy rationing and taxing scheme through the Senate Environment and Public Workers Committee this week, while the country is focused on health care. Sen. Boxer is even trying to force it through without the official EPA analysis of what's in the bill and how much it will cost.

It's bad enough to try to pass the biggest tax hike in history, hidden in what's supposed to be an environmental bill. But… Continue

Can you contribute to unraveling the mysteries of the 1,990 page health care takeover bill? By breaking it down into small bites, you certainly can. 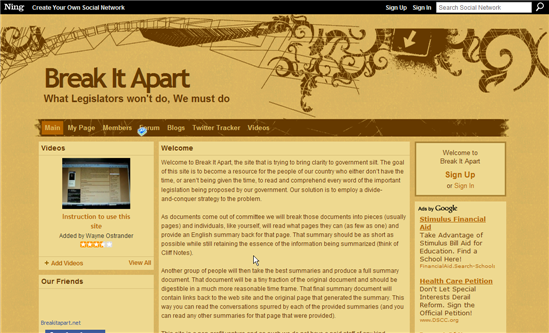 The Federal Reserve is the source of Congress' power to spend vast sums we cannot afford to repay, to encumber our children, to undertake nationalized healthcare, to prop up socialism, and to gut the Constitution. The solution begins with a thorough audit of the Fed. But the Audit the Fed bill, HR1207 has been gutted in committee.

It's time to fight back. Please phone or fax the House Financial Services Committee Democratic Co-sponsors of… Continue