Many of you have called and emailed and faxed Senator Specter telling him to vote NO on the health care takeover and cap-and-trade.

Now, you have the opportunity to send your message to Senator Specter face-to-face.

Senator Specter has scheduled a series of town hall meetings across Pennsylvania and I’m asking you to attend.

This morning the American Liberty Alliance announced the launch of a nationwide "Recess Rally" happening across each and every House district office on August 22nd, 2009.

How to find us
"At stage, Green Ford Explorer, "Don't Tread On Me" Flag flying"


WE NEED YOU, EVERYONE MOTIVATED TO TAKE PART IN THIS RAPIDLY GROWING TEA PARTY!

On The Nature of Rights

At our last general meeting, I was privileged to address the group on the topic of the nature of rights. For those who may be interested, here is the text of my message.

This is a good "Tea Party" video. Hope you enjoy it.

This resulted from a Mom in Alabama asking her high school son to help with a commercial for theTea Party she was involved in organizing.

Boy, does it slam the message home. Very impressive. Here is her note:

"I asked Justin if he could help me make a commercial for my group's Tea Party. He sat down at the laptop for about an hour, and then brought this to me and asked, 'is this okay, Mom?'

After I finished watching it, my stomach was in my… Continue

5 Freedoms You Would Lose in Health Care Reform

Here is a very good article, sent to me by Robert Shearer.

5 Freedoms You Would Lose in Health Care Reform

If you read the fine print in the… Continue

HR 2749, the All Industrial Agriculture bill

From the Campaign for Liberty:

This just in from the National Independent Consumers and Farmers Association (NICFA):

HR 2749, the All Industrial Agriculture bill, could be voted on in the House of Representatives Tuesday. Please call your Congressman immediately and request that he or she reject this bill. Normal voting rules have been suspended to try and ram this through, so please call… Continue

An excellent article referencing the significance of rights

This article makes a point I failed to make when I spoke to the group last Tuesday. That point is that the arguments put forth by Republicans against currently debated legislation are as flawed as those of the Democrats because both embrace collectivism at the expense of individual rights. So long as elected officials embrace collectivism, the march to the left will continue.

The calls you have been making this week are having an impact. Unfortunately, it seems that our voices are simply not quite loud enough. Speaker Pelosi has said that she has the votes to move the Health Care bill. So, we have to step it up a little bit more. Will you please joining us in emailing the Chiefs of Staff of the following moderate to conservative Democrats?

It is best if you email the… Continue

and visit http://www.toomeyforsenate.com/index.php and GET INVOLVED today! We need to defeat Spector. He is a political elite, lifetime politician and is out… Continue

If you are unable to see the live airing of this program,… Continue

A vote to protect your right to travel out-of-state with a firearm could
come to a vote next week -- even as early as Monday!

Senators John Thune and David Vitter are the sponsors of S. 845 -- a
bill… Continue

Michael Jackson dies and it's 24/7 news coverage. A real American hero dies and not a mention of it in the news. The media has no honor and God is watching.

This is potentially a complex issue because it represents a tax increase and the promise of a related property tax cut. On the face of it, this sounds just and reasonable, but in the real world of politics, things seldom what they appear. Without time to digest this issue, this organization cannot take a position. Therefore, we urge members to consider attending this press conference as 9-12 citizen reporters and asking some hard question. Then report back to the group with what you learn or… Continue

The New Tea Parties: An Overture to Reclaiming Our Lost Freedom

The New Tea Parties: An Overture to Reclaiming Our Lost Freedom
by Edward Cline (July 14, 2009)

This is an adaptation of an address I will make at the Richmond, Virginia Tea Party on July 25, 2009:

Opinion from TheLibertyPapers.com: The Tea Parties Are Ultimately Bad For Liberty

It may be helpful to consider this writer's thoughts, even though we may disagree.

TheLibertyPapers.com
The Tea Parties Are Ultimately Bad For Liberty
by Kevin

This post is the opening salvo of a feature we occasionally offer here at The Liberty Papers called “Point-Counterpoint”. In this feature, Kevin is arguing the… Continue

Hi everyone, I am one of the co-organizers of the Blair County Tea Party.
I am going to be in Johnstown later today and would like to meet-up with people at 5:00 at the Cambria Library if you can make it.

Minnesota Congresswoman Michele Bachmann has been a tad concerned about responding to the 2010 Census. “If we look at American history, between 1942 and 1947, the data that was collected by the Census Bureau was handed over to the FBI and other organizations at the request of President Roosevelt, and that’s how the Japanese were rounded up and put into the internment camps,” she told Fox News last month.…

CDT covers our protest of Rendell in Bellefonte 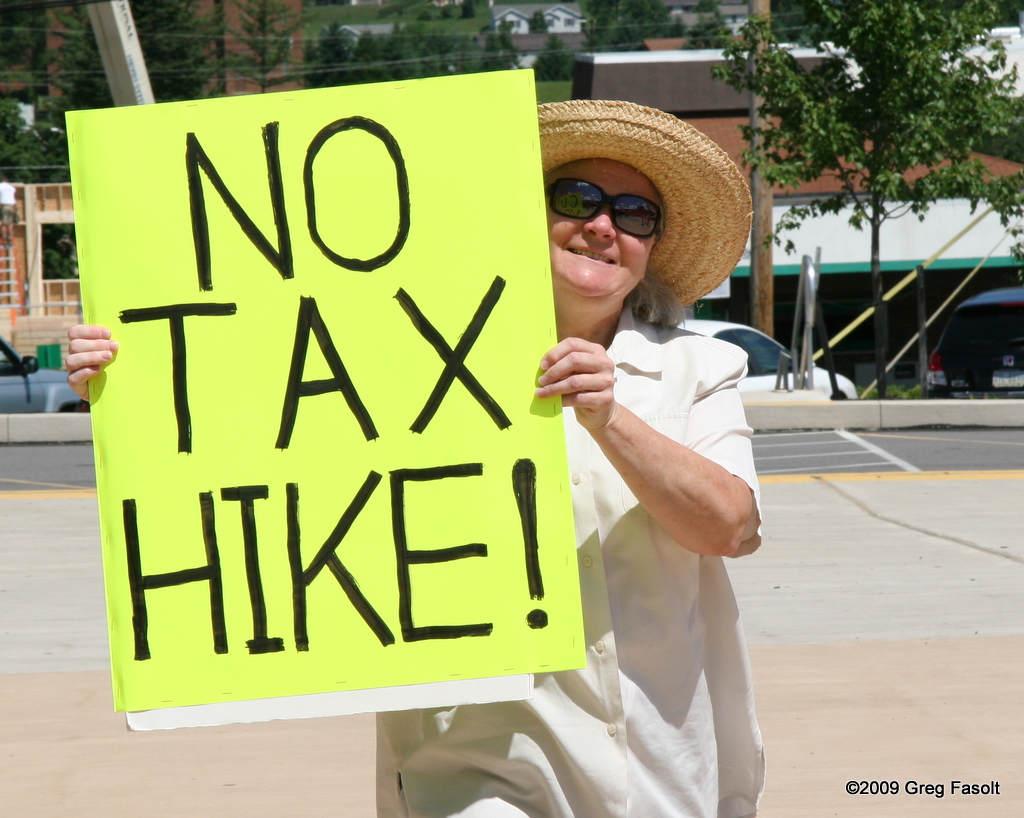 PA State Senator Dominic Pileggi and his colleagues force issue with Governor Rendell by putting the ball in his court.

In a statement released July 1st, Pennsylvania state Senator Dominic Pileggi has come out on the right side. Mr. Pileggi, who serves as Senate Majority Leader, is proposing a more fiscally responsible approach to Pennsylvania’s budget woes.