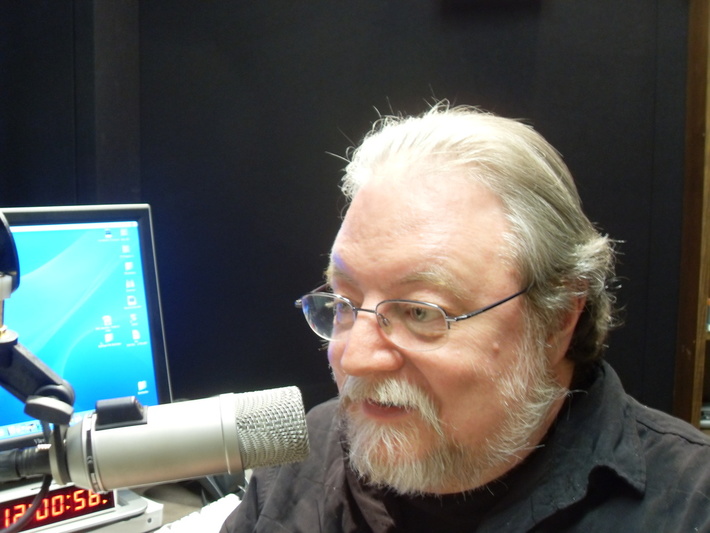 Steve Biddle has not received any gifts yet

Give Steve Biddle a Gift

Yesterday April 14, after a delightful hour with Peter Trippett and Kris Eng on my WBLF show, I did a commentary. This sort of thing is unusual for me. Here's the text; I hope you like it:I’m tired today. Very, very tired. I’m not saying this to complain, or to solicit your sympathy… I’m just stating a fact. I’m tired because in order to keep my headabove water, I have to work day and night just to make ends meet.Again… not a complaint. It is what it is. I am not a victim, I’m justa guy, who,…See More
Apr 15, 2010
0 Comments

NAME OF THE CITY, TOWNSHIP, BOROUGH, ETC. WHERE YOU LIVE
State College

WHY ARE YOU HERE?
It's time to get involved -- and help to save the republic from the socialists

Yesterday, April 14, my guests on WBLF were Peter Trippett and Kris Eng. It was a fun hour with them. During the 4:00 hour, I did a commentary that, for me anyway, was unusual. Here's the text; I hope you enjoy it:

I’m tired today. Very, very tired. I’m not saying this to complain, or to solicit your sympathy… I’m just stating a fact. I’m tired because in order to keep my head above water, I have to work day and night just to make ends meet. Again… not a complaint. It is what it is. I am not a victim, I’m just a guy, who, like many of us these days, must do things we never thought we’d have to do at this stage of our lives, just to keep on living. So, I’m tired.

And when I’m tired, I tend to not be particularly analytical. Fatigue tends to open our subconscious mind, and allow thoughts to flow in and mingle, and create impressions — not analysis. And the feelings and impressions I’m getting right now are not particularly pleasant. Tell me if you feel this way: You feel as if we as a country — as a civilization – are on the edge of an abyss. You feel as though perhaps we’re about to lose it all. That the world is in the process of a change that will alter everything for all time.

In 1998, Peggy Noonan wrote a column that eerily predicted the events of September 11, 2001. She really didn’t know what was going to happen, but, like now, she just had a feeling that something awful was about to happen. Here, in part, is what she wrote:

“If someone does the big, terrible thing to New York or Washington, there will be a lot of chaos and a lot of lines going down, a lot of damage, and a lot of things won’t be working so well anymore. And thus a lot more . . . time. Something tells me we won’t be teleconferencing and faxing about the Ford account for a while.

The psychic blow–and that is what it will be as people absorb it, a blow, an insult that reorders and changes–will shift our perspective and priorities, dramatically, and for longer than awhile. Something tells me more of us will be praying, and hard, one side benefit of which is that there is sometimes a quality of stopped time when you pray. You get outside time.

Maybe, of course, I’m wrong. But I think of the friend who lives on Park Avenue who turned to me once and said, out of nowhere, “If ever something bad is going to happen to the city, I pray each day that God will give me a sign. That He will let me see a rat stand up on the sidewalk. So I’ll know to gather the kids and go.” I absorbed this and, two years later, just a month ago, poured out my fears to a former high official of the United States government. His face turned grim. I apologized for being morbid. He said no, he thinks the same thing. He thinks it will happen in the next year and a half. I was surprised, and more surprised when he said that an acquaintance, a former arms expert for another country, thinks it will happen in a matter of months.

So now I have frightened you. But we must not sit around and be depressed. ‘ Don’t cry,’ Jimmy Cagney once said. ‘There’s enough water in the goulash already.’”

Now, we’re in the same place. It’s not simply another 9/11 we fear, although that’s certainly possible. It could be that. It could be complete, sudden, economic collapse. It could be an attack on our electronic infrastructure – a cyber attack bringing down the internet… and that could be as deadly and devastating as nuclear weapons, dirty bombs, or other terrorist attacks.

Am I being overly pessimistic? Well, yes and no. Pessimistic, yes, because I think we, not only as a country but as a world, are standing at the edge. I think most of us feel it. We’re on the edge of complete change. It’s change we can believe in, alright… but it’s not the change we want. It’s been coming slowly… then, more rapidly… and although we’re not exactly sure what form it will take, it will be big. Huge. Earth shattering. We can feel it in our bones. You can, can’t you? It, whatever it is, will change everything for all time. It will be terrible, and awful, and will bring us down.

From that – whatever it is – will be the seeds of rebirth. A chance to, perhaps, start over and re-shape the world. There are some of us who see it coming. Whatever ‘it’ is. I think, in large part, this is why the tea party movement was born. Now wait. Hear me out.

After years of complacency… of not paying attention to the gathering clouds… after living lives of abundance and wealth and freedom, we’re finally waking up to the reality that the way we’ve been living is not the normal state of the world. It’s all been a dream, and this time we cannot roll over and go back to sleep. Yes, the movement is about the expansion of government… yes, it’s about the confiscatory taxes we see coming… yes, it’s about the increasingly totalitarian attitude of those we elected to serve us… not to rule us.

But it’s more than that: It’s about banding together – so we can BE together when the big, awful thing happens. It’s about unity… standing strong… helping each other… understanding the true meaning of love and charity and hope.

Yes, we’re angry. But this is also why you don’t see the tea partiers engaging in the sort of radical, nasty, angry violent protesting that we see coming from the left. Our rallies, our protests, our gatherings — are about hope. About building up, not tearing down. You see families, you see mainstream Americans, who, for the first time in my memory anyway, are waking up. Coming together. We are not narcissists, demanding rights… demanding “social justice,” whatever that may be today. We are angry. But we are strong and getting stronger. Our movement is about awakening. Finally seeing the danger. Spreading the word to others. And doing what we can to secure the future.

So the tea party movement is about more than anger and protest. It is about the future, and how we are going to face it together. And this is the essence of conservatism: taking care of our own. Our loved ones. Each other. Because when it all comes apart, and in whatever form it takes, it is we — the conservatives — who will not be looking for government help. We’ll be too busy taking care of it ourselves.

And there’s one other thing we must do. Again, quoting from Peggy Noonan’s 1998 column:

“I once talked to a man who had a friend who’d done something that took his breath away. She was single, middle-aged and middle class, and wanted to find a child to love. She searched the orphanages of South America and took the child who was in the most trouble, sick and emotionally unwell. She took the little girl home and loved her hard, and in time the little girl grew and became strong, became in fact the kind of person who could and did help others. Twelve years later, at the girl’s high school graduation, she won the award for best all-around student. She played the piano for the recessional. Now she’s at college.

That’s from Peggy Noonan. I might add: Stay informed. Stay centered. Love and be loved. Stay strong. Spread truth – but always in a civilized and respectful way. And, as Pope John Paul II used to say, fear not. Fear Not.

Yesterday April 14, after a delightful hour with Peter Trippett and Kris Eng on my WBLF show, I did a commentary. This sort of thing is unusual for me. Here's the text; I hope you like it:

I’m tired today. Very, very tired. I’m not saying this to complain, or to solicit your sympathy… I’m just stating a fact. I’m tired because in order to keep my head
above water, I have to work day and night just to make ends meet.
Again… not a…

Greg Fasolt said…
Hi Steve - Thanks for joining us, and providing the great opportunity to be on the air with you on WBLF 970 AM.

If you have not already done so, please sign-up for our mailing list, take our survey, and check out The Articles of Freedom, all on our home page at http://912CentralPA.org.