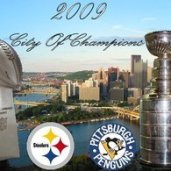 What: Have fun while raising awareness of the Federal Reserve and promoting Saturday's End The Fed march and rally. We'll be distributing literature and talking with bar patrons.

Here is a list of locations that have been suggested, but are not confirmed. We don't want to have to pay cover charges for places hosting bands that night, so we'll probably play it by ear.

Where: Meet at St. Stanislaus Kostka Church, 57 21st Street in the Strip District and march to the Federal Reserve Bldg, 717 Grant St, Downtown.

What: Come celebrate the one year anniversary of the launching of the End the Fed! Movement. Imagine...in less than a year we have forced the Establishment to hold hearings on our bill to Audit the Fed! The END is much Nearer! Let's keep spreading the words, waking up minds and not let the Fed and their associates get a peaceful night’s rest.

Once again we will gather to protest the unlawful Federal Reserve System. Be ready to raise your voice in protest and respectfully inform as many people in the Pittsburgh Area as possible. Screaming and yelling at people when you are trying to hand them information is absolutely no help, so be ready to teach, not terrify.

We will Meet at St. Stanislaus Kostka Church in the Strip District between 10 and 11:00AM. The march will begin at 11:00 to arrive at the Federal Reserve Building on Grant St. by no later than noon for the rally.

We will need a couple of people at the Federal Reserve Building before noon (for those who don't/can't march or to clear up potential confusion about where the RALLY is actually taking place.)

We will also need a couple of people to stay behind at the church to direct people who arrive late.

DVD's and Quadfolds as well as some Postcards will be provided for whomever needs materials to handout.

If you're a you'd like to RSVP on the national End The Fed! Meetup Group site, go to http://www.meetup.com/End-The-Fed/calendar/11579736/ and join the group.

RSVP for End the Fed Rally - Pittsburgh to add comments!